I’m always working on new updates for my game Traffic Brains 2. I’m making a new levels pack with much bigger cities. Got the idea to create mandatory traffic points, where players have to divert some traffic. I think this new game mode adds interesting dynamics to the game.

By Arunas Pangonis, 6 days6 days ago

In the last couple of weeks, I’ve been working on player leveling systems and item unlockables. It was one of the last systems in this game that was missing. There was no progression throughout the game. Each level offered the same just a little bit more difficulty.

Now after each level player unlocks something new. New road signs can be unlocked. After each level, the player is rated with stars. Stars give experience points. With experience, players’ level is increased. With new levels, come new name titles. All game feels more engaging.

I have just released an update for Traffic Brains2 2.6.0. In this update, you will find a new money system. And road priority signs, which can really help control traffic. What the video for more information.

By Arunas Pangonis, 4 months4 months ago 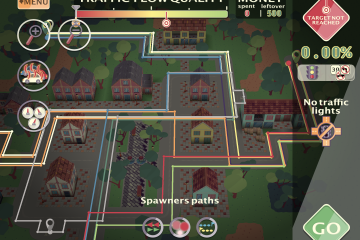 I’m always looking for ways to improve player experience. When I developed Traffic Brains 2 in the early stages some of the features were rushed. Now, when the game is released I have to improve on some aspects of the game.

One feature, that I received quite a few comments about is the spawner’s path visualization. Players have a hard time understanding where is what.

Those arrows are ok when there are not many spawners. But, when things get serious it is hard to see through that clutter…

I have changed the arrows to simple lines, with a little bit offset from each other.

Is it an improvement? What do you think? I find it easier to follow lines, than arrows in the previous version.

By Arunas Pangonis, 4 months4 months ago

I have received good feedback from Reddit r/gameDesign and I have made an update on my tutorial.

Things that I changed:

Do you see how it can be improved more? Maybe change the wording or pacing? Is it clear to you?

By Arunas Pangonis, 5 months5 months ago

Here is a video of how I’m creating buildings for my game.

This is the second part of the level editor preview. In this video, I’m showing how to add cars and traffic lights. Also testing of the level.

A few people asked me about my level editor. So I thought I would make a video explaining some parts of it and show how I’m creating levels for my game Traffic Brains 2.

This is the first part, where I’m showing how roads are placed, buildings created and terrain modified.

Have a look at this trailer. What do you think? It is very basic. Without funny stories and gags. But it is just what I need.

By Arunas Pangonis, 7 months7 months ago

By Arunas Pangonis, 9 months9 months ago